An engagement ring differs from a wedding band in that it is presented at the time of a proposal and when a partner agrees to marry. The official connection of marriage is symbolized by the wedding ring, which is transferred at the wedding ceremony. As a sign of love and devotion, both rings are frequently worn together.

What Is an Engagement Ring?

An engagement ring is a ring given by someone to his or her future spouse while courting, in Western countries often also at the time of an official engagement. The practice of giving engagement rings is predominantly a modern one, generally dating from the early 20th century.

What Is a Wedding Ring?

A wedding ring or marriage band is a finger ring made of metal, usually gold or silver, worn by some married people to signify their status as married. The most recognized symbol in western cultures is that of a plain golden circle worn on the hand(s) opposite to one’s own wedding ring finger(s). It is typically worn on the left hand in countries that are predominantly Christian, less frequently on the right hand. 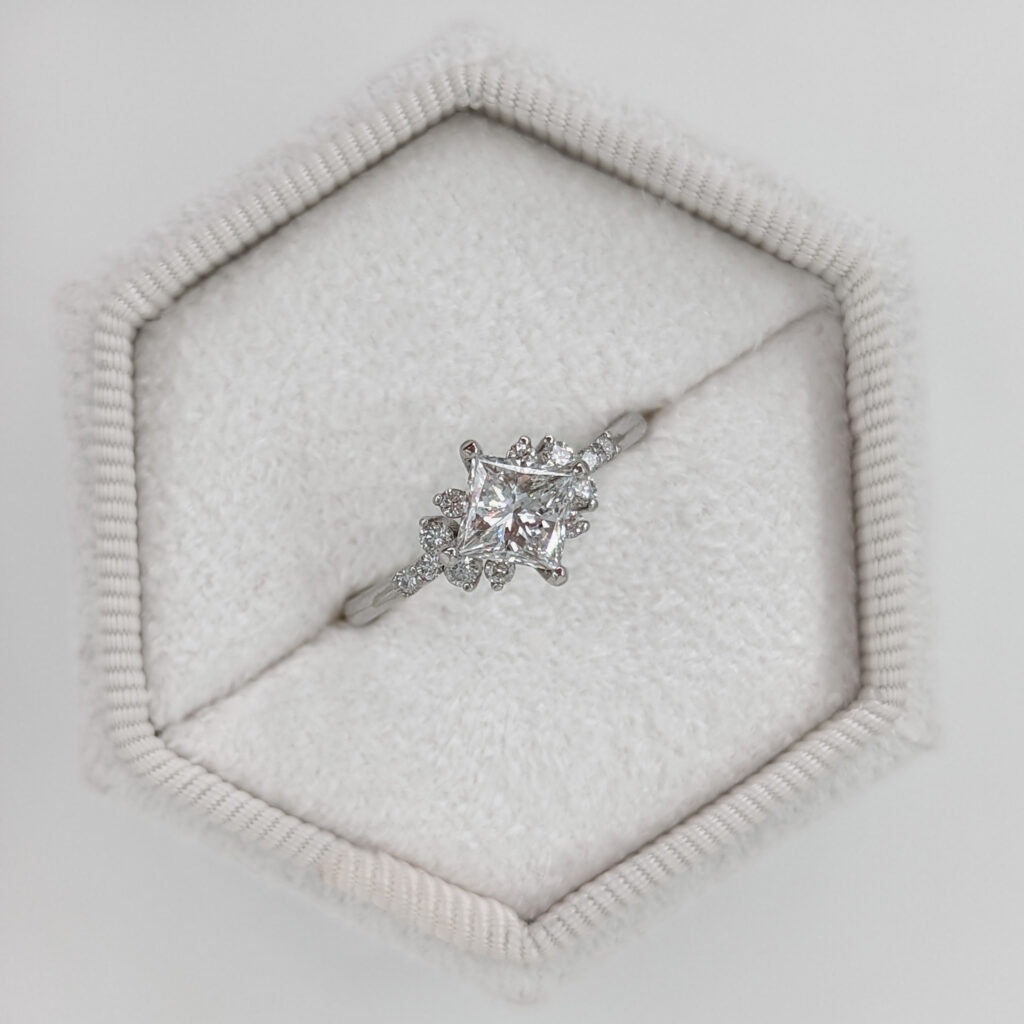 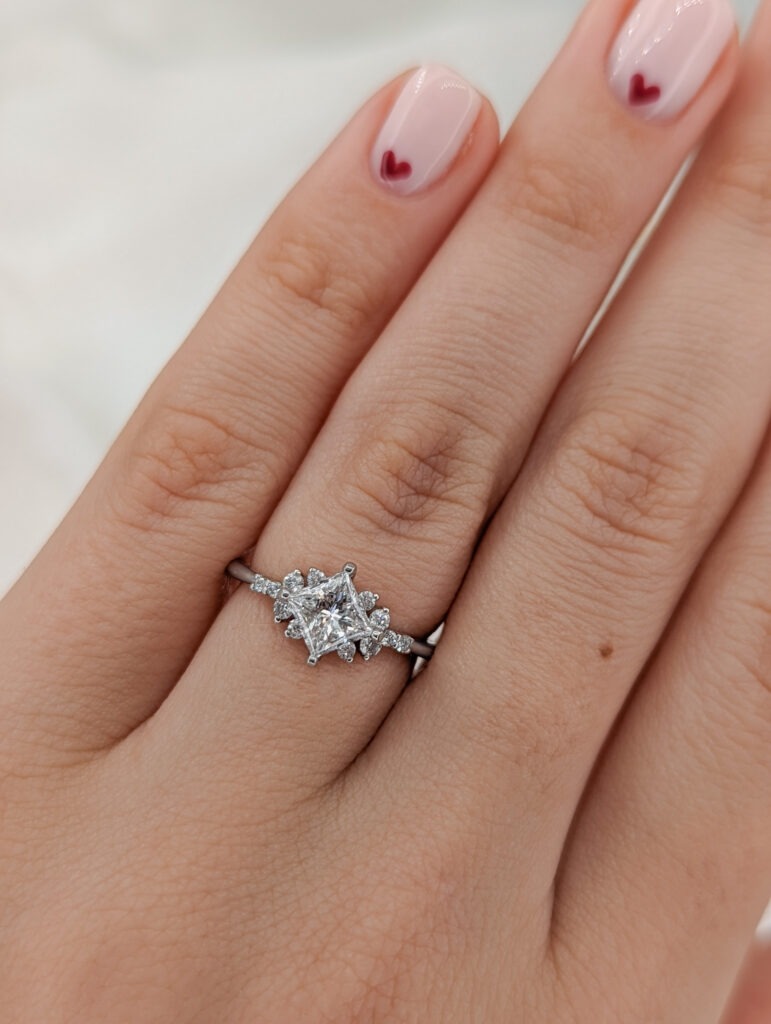 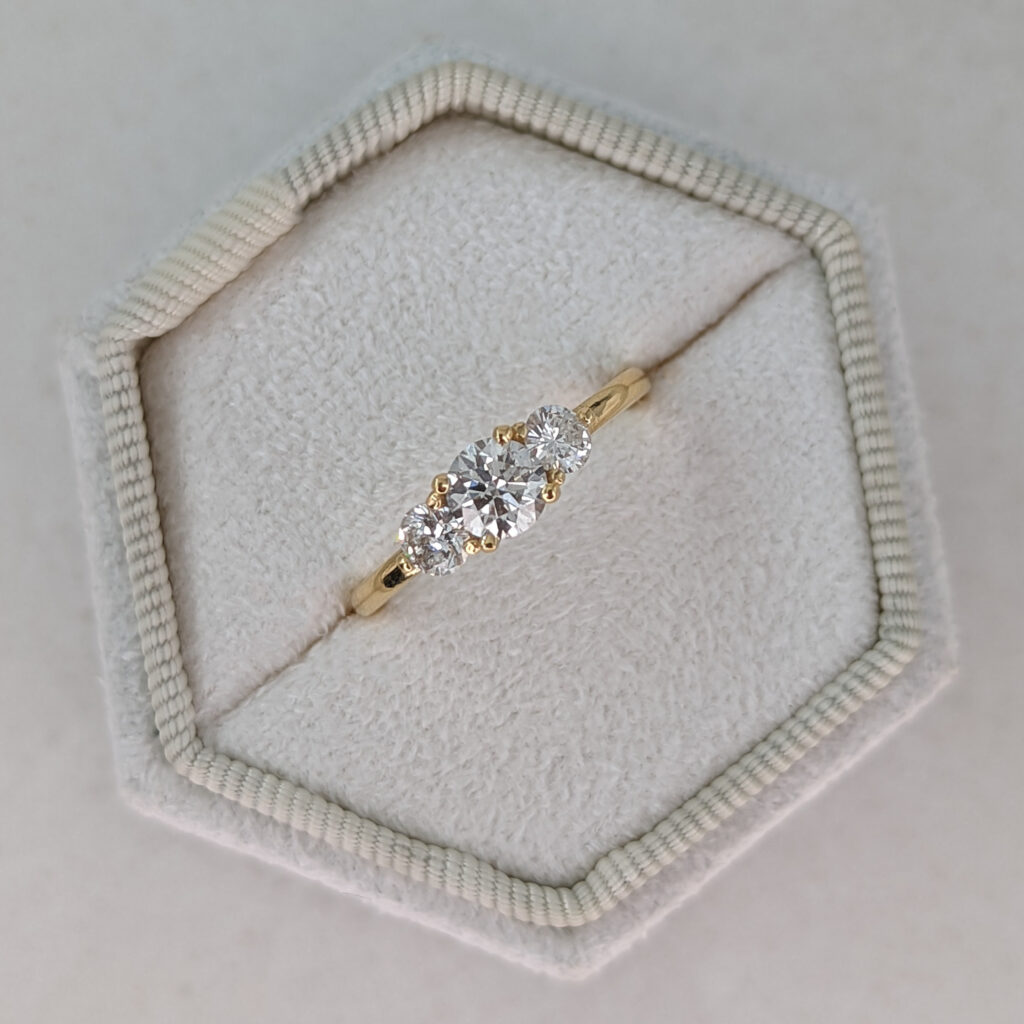 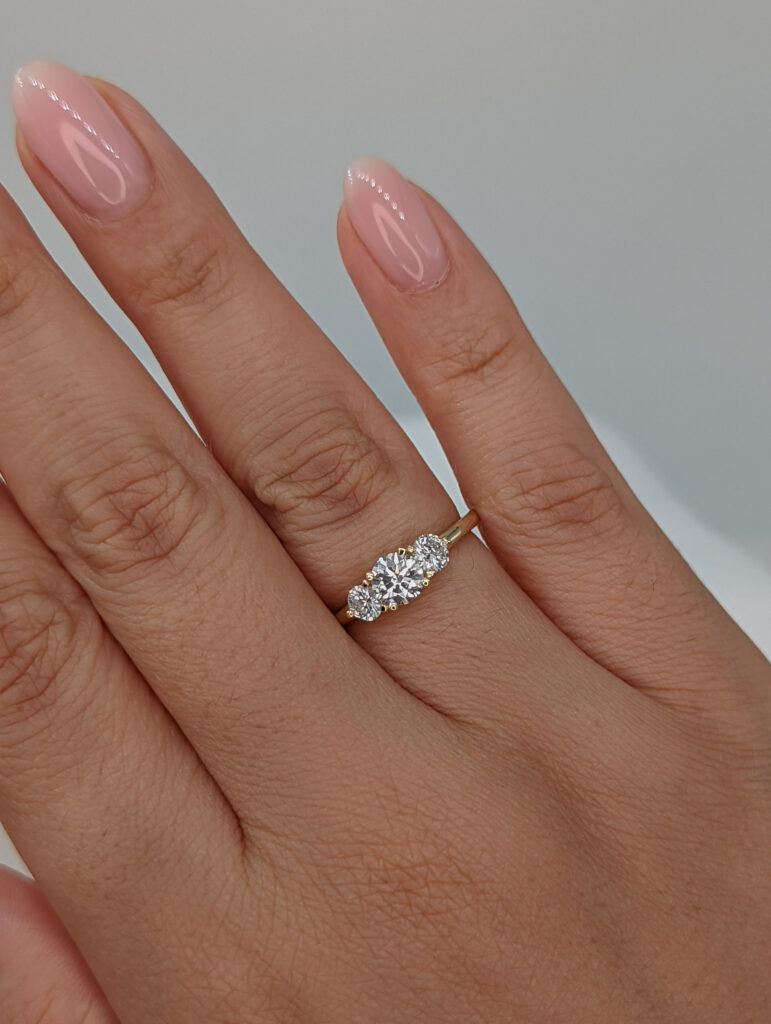 Agnie Ring – 0.90 Carat Round Diamond Engagement Ring with Round Side Diamonds 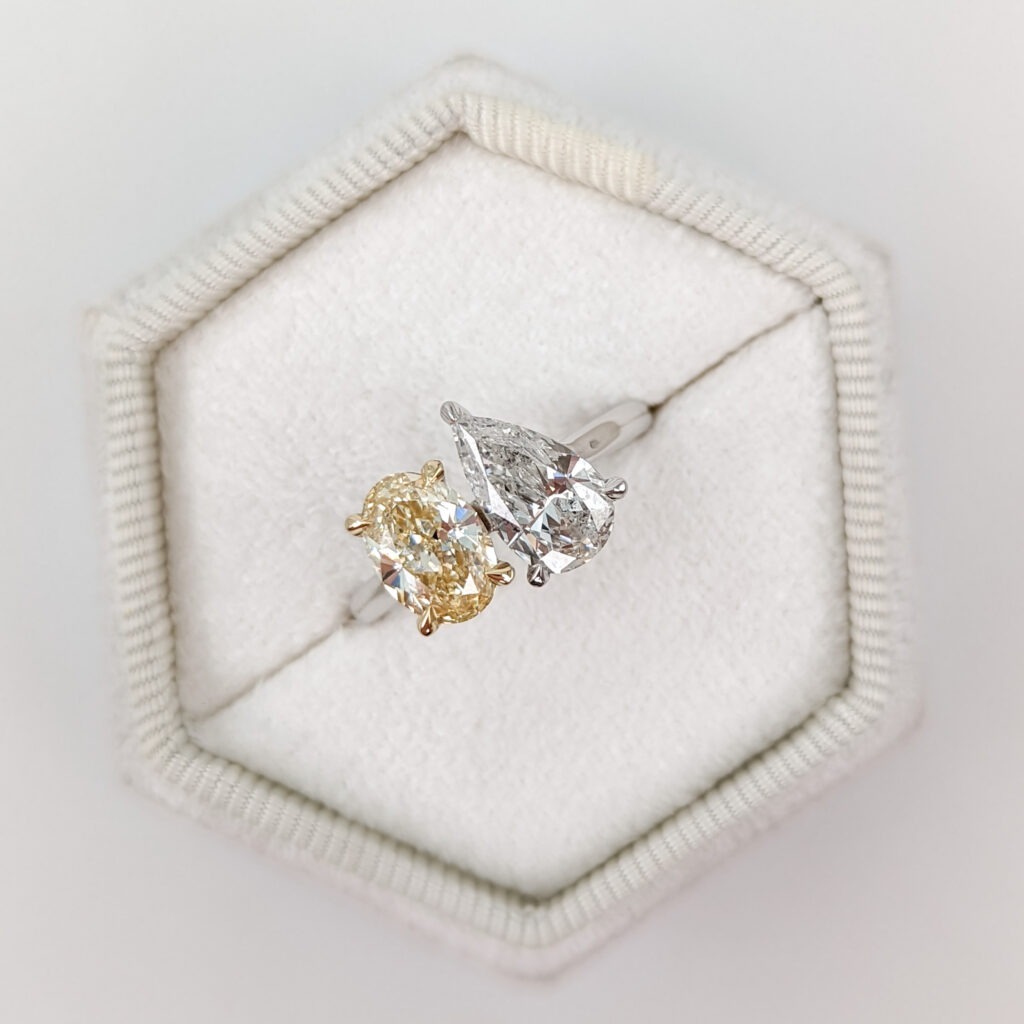 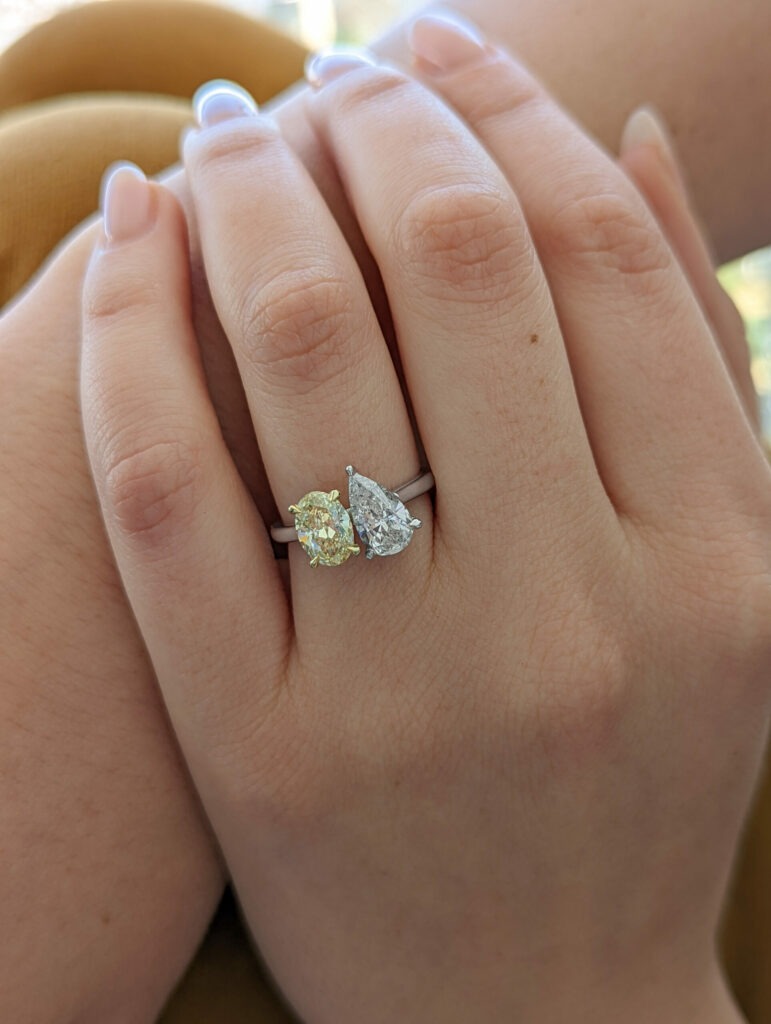 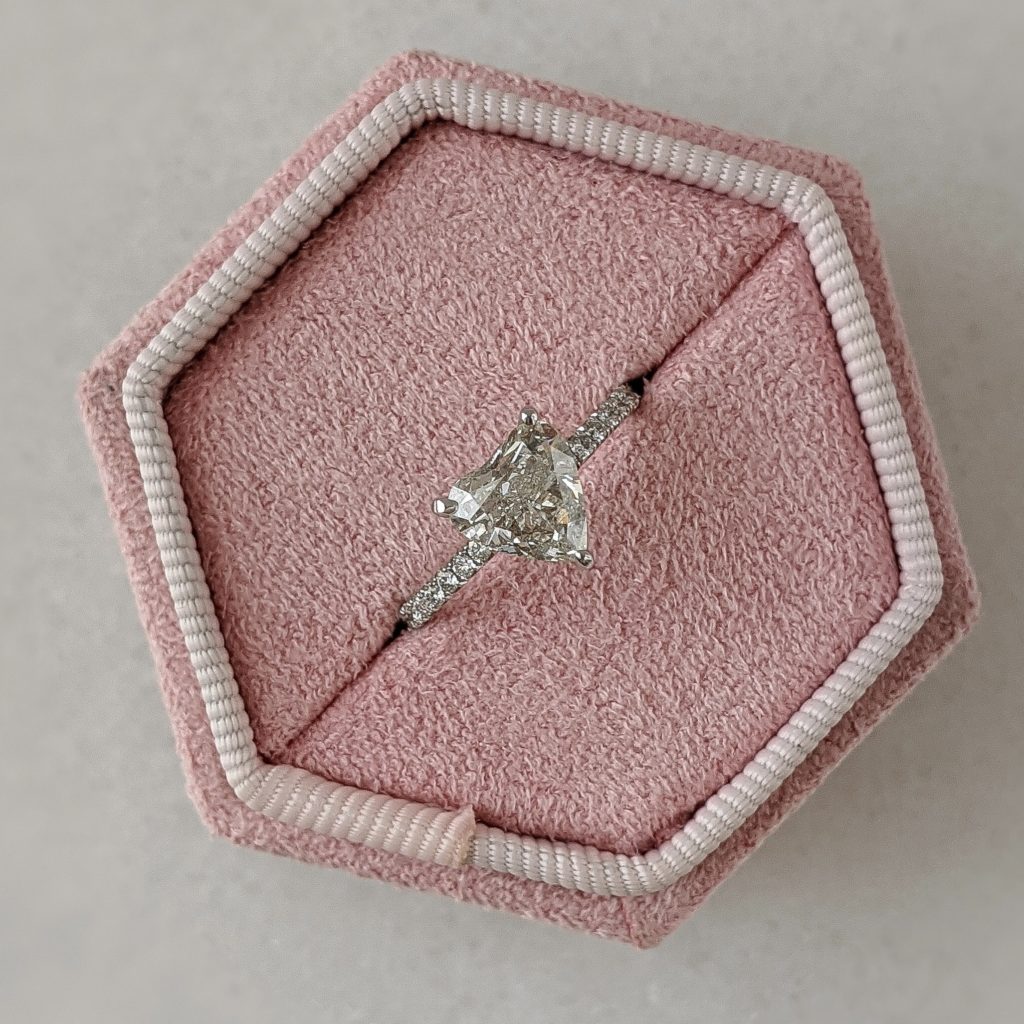 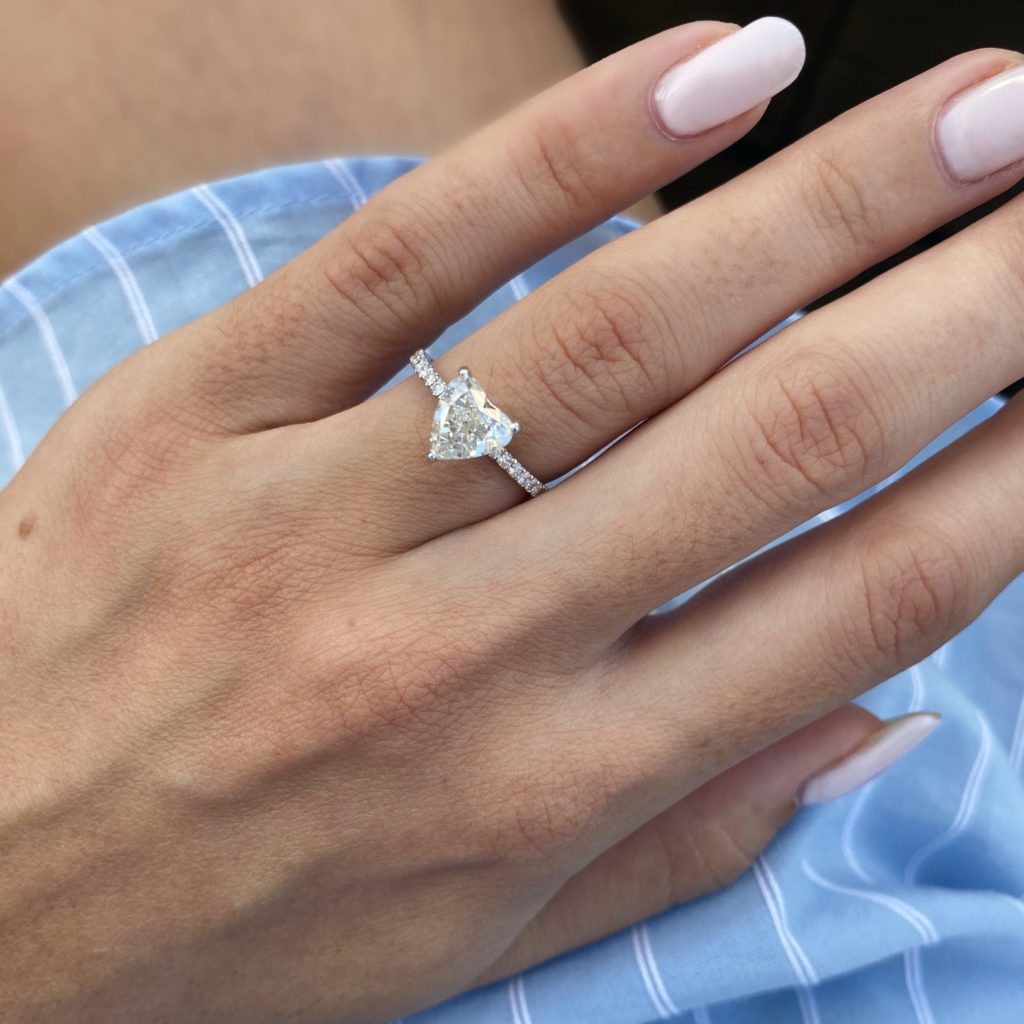 The Difference Between Engagement Rings and Wedding Rings

The main distinction between an engagement ring and a wedding ring is that most often, engagement rings include gems while wedding rings are “simpler” and usually include only a gold ring. These rings thus perform the same function: they represent the couple’s love and devotion to one another. Therefore, in terms of appearance, style, and features, it’s easy to tell one from the other.

There’s now a reason why girls start fantasizing about their perfect engagement rings while they’re young. These pieces seem to be the most opulent of them all, with complex bands, a mix of white and colored diamonds, and exquisite settings. Furthermore, the engagement ring has a special meaning because it is usually given at the time of the proposal.

Wedding bands, on either hand, are usually simpler, but they may still include paving diamonds or even other valuable stones. Although their engagement ring is flashier or more ornamental, many ladies may choose for a simple platinum or gold band. Time is also a significant differentiator. Whereas engagement rings are given at the time of the proposal or shortly thereafter, the bride and groom exchange wedding rings during the ceremony.

Wedding bands can be combined with engagement rings; however, they must always be positioned on the same finger’s bottom. The rationale behind it is that the wedding ring is seen to be the greatest symbol of eternal love and should be worn near to the heart. Because of this long-held tradition, the engagement band is removed during the ceremony such that the wedding ring can always be placed beneath it.

In certain circumstances, purchasing a bridal suite makes sense. Couples will no longer have to fight to match their engagement and wedding rings. To guarantee that now the couple’s jewelry is completely harmonized, some wedding sets contain the couple’s wedding ring as well.

Connected sets will complement one another well, but one disadvantage is that the wedding band must always be placed with the engagement ring since neither component would look correct if worn alone. The wedding band and engagement ring, on the other hand, can be worn separately in a pair. Even yet, there are no guidelines for how effectively the two rings may complement or mix. 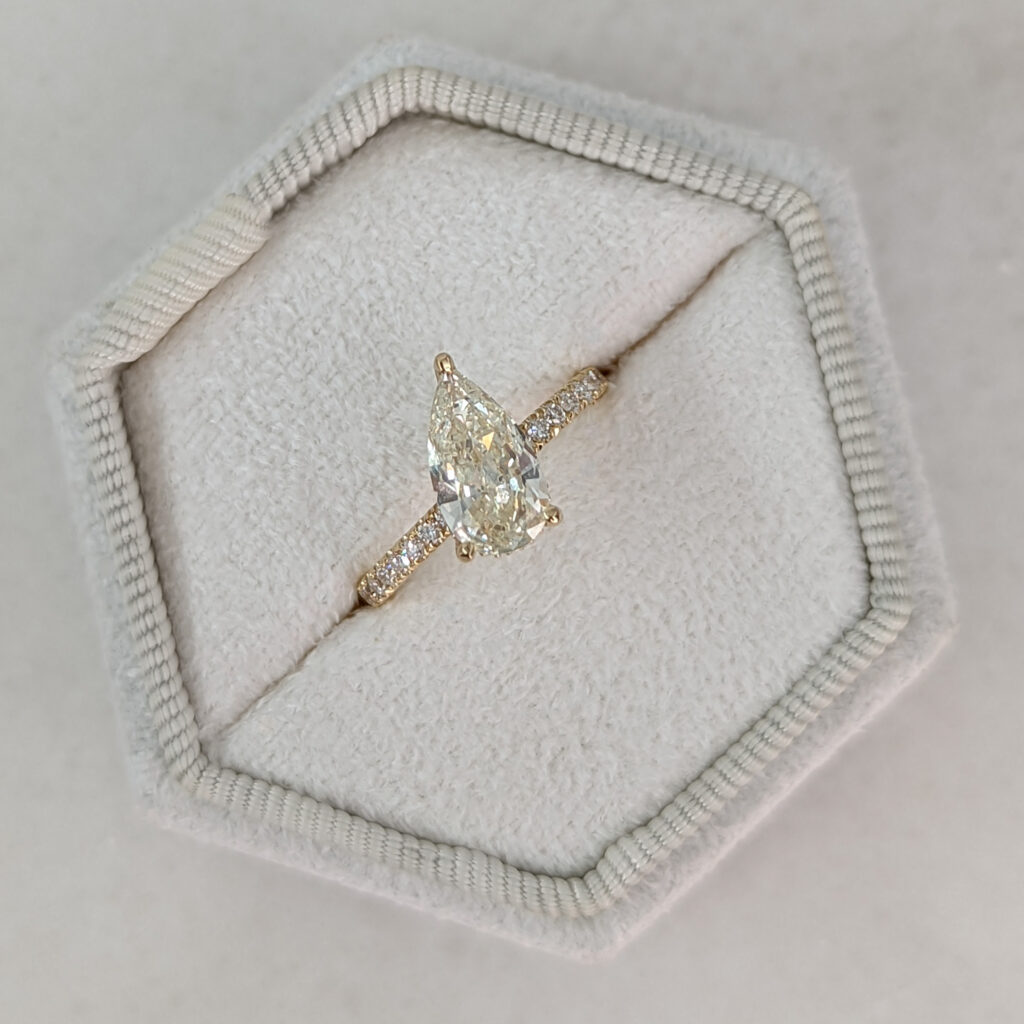 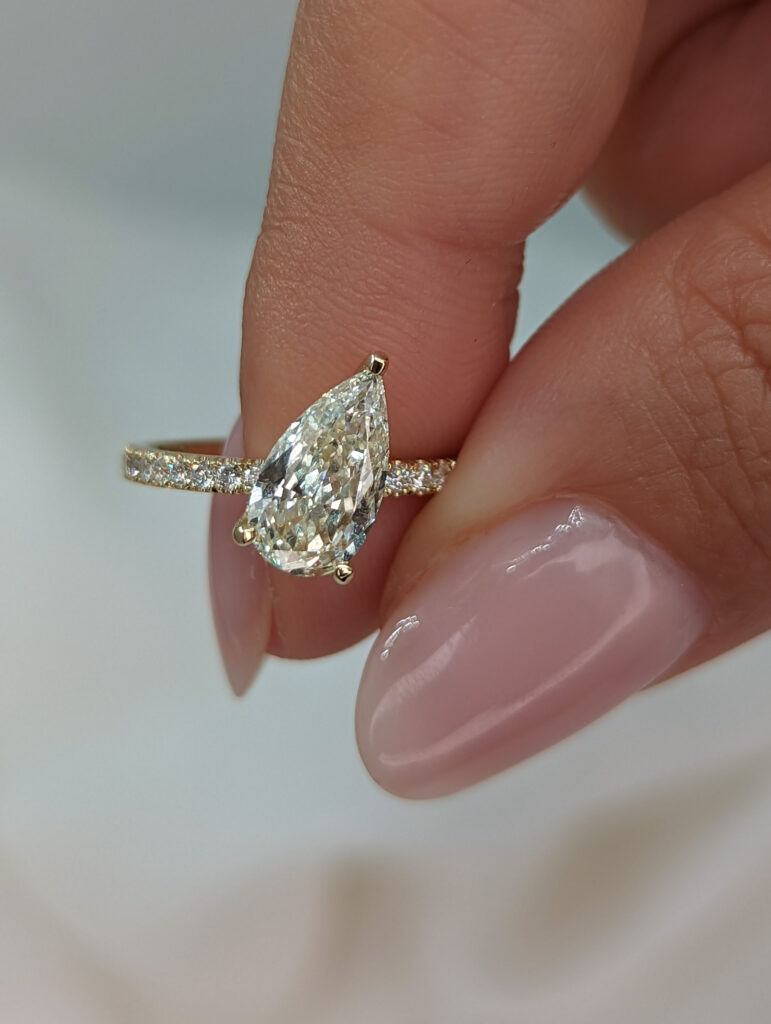 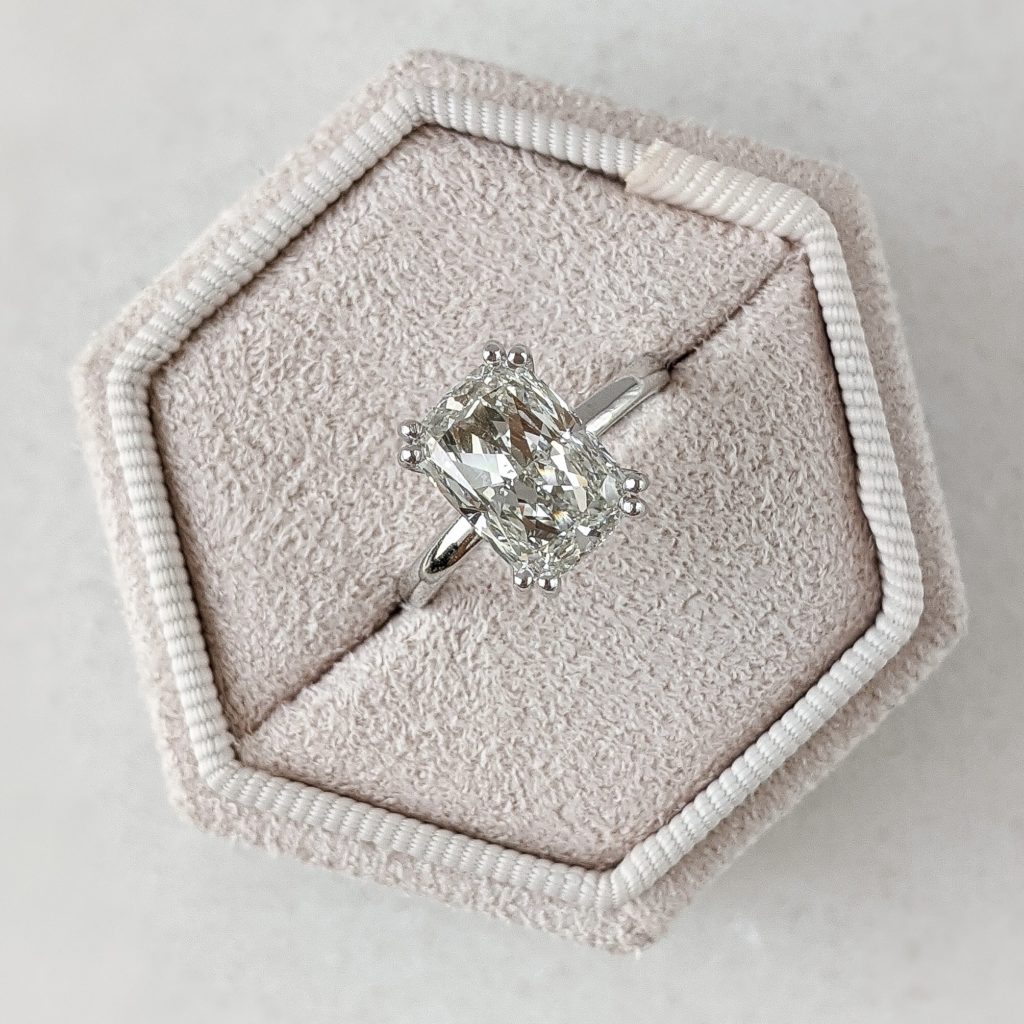 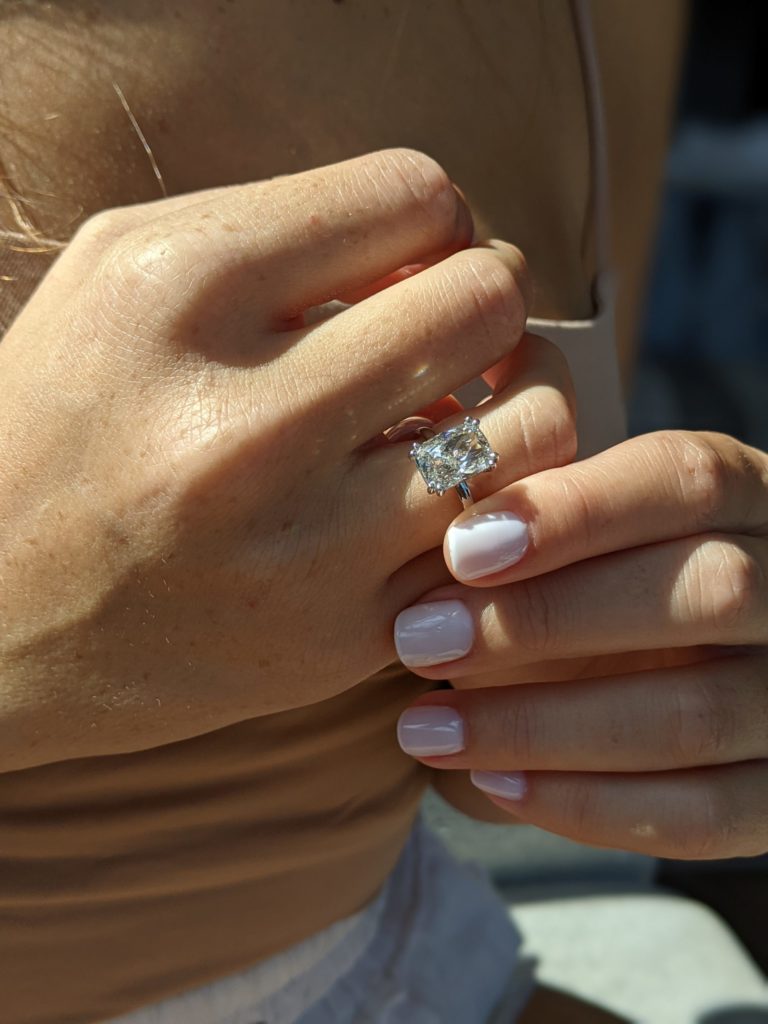 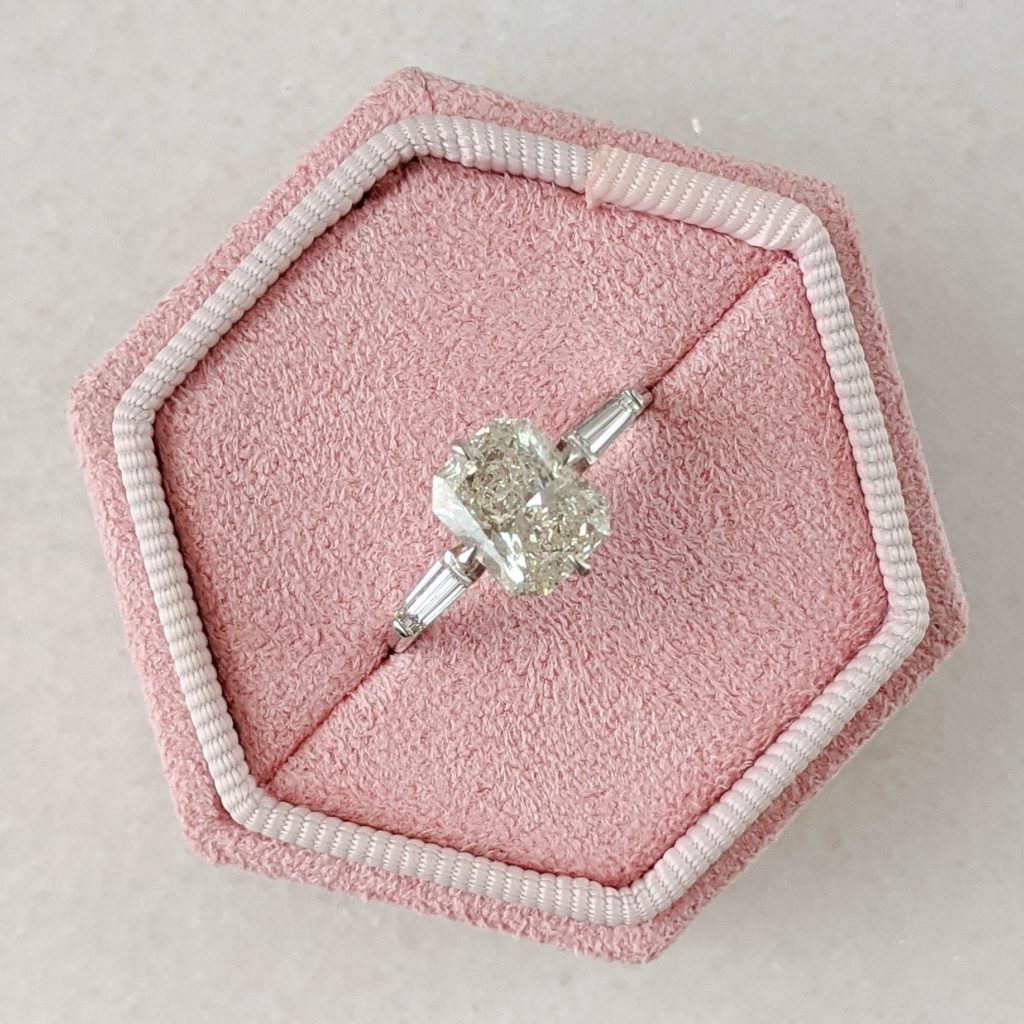 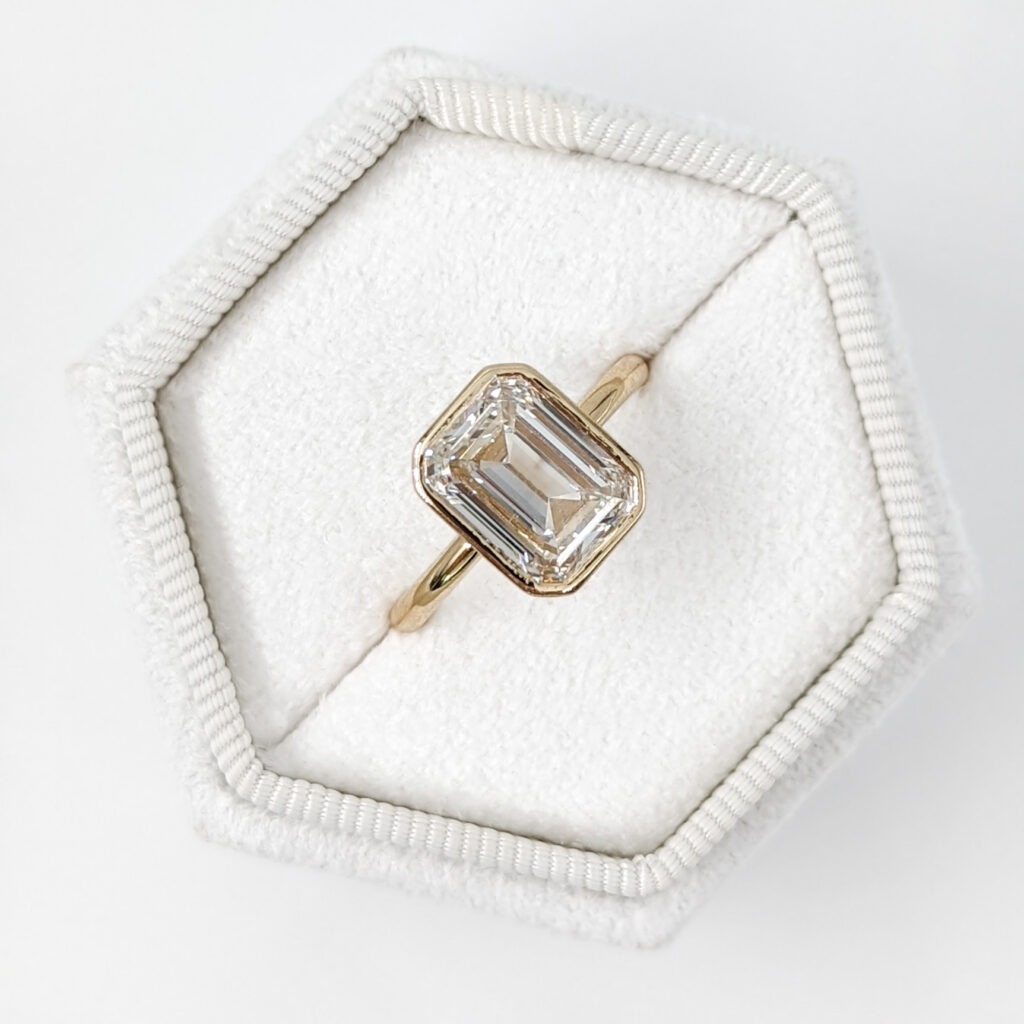 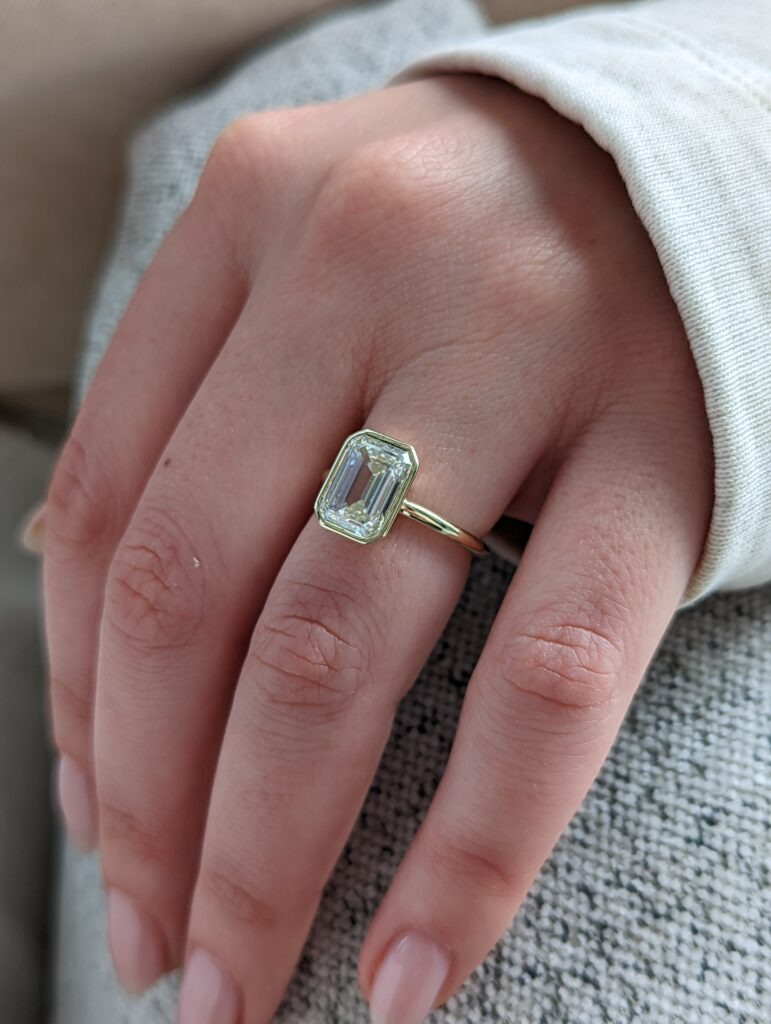 How to Wear Your Engagement and Wedding Rings?

An engagement ring with a wedding ring is commonly worn together around the fourth finger on your left hand. When it comes to stacking them, it’s customary to place the wedding band within the engagement ring to bring more attention to your heart. However, several brides choose to keep their engagement ring across one hand and their wedding band on another, particularly if the bands are too different to stack.

Wearing your engagement ring upon your left ring finger during your wedding ceremony is proper etiquette (the finger next to your pinky). The band is generally worn mostly on the ring finger as well, according to male wedding ring standards. You have the option of disregarding traditional wedding ring conventions and wearing your bands on any finger.

Are Engagement Rings and Wedding Rings the Same?

An engagement ring is typically given at the time of a proposal or shortly just after the couple has agreed to marry. A wedding ring is frequently presented as the official sign of the marriage union during the wedding ceremony.

Yes, they are distinct because engagement rings are presented after a proposal, and wedding rings are swapped during the wedding ceremony. Complicated engagement ring designs, such as those with a central diamond or gemstone, are becoming more popular. Wedding bands, on the other hand, are often conventional and straightforward.

Do You Wear Your Wedding Ring and Engagement Ring Together?

Why Are Engagement Rings More Expensive Than Wedding Rings?

Because engagement rings often have a huge diamond as well as other exquisite features such as milgrain or pave, diamonds are more costly than wedding bands. Simple wedding bands, including a simple metal band or just a, pave band with little diamonds, are common.

Do You Need Both?

In the end, it all boils depending on personal choice. Of course, if you want the conventional style. A wedding ring and engagement ring combo is a classic and attractive appearance, whether you include an everlasting band studded with pavé diamonds or even a plain metal band.

Building a diamond stack of 3 (or more!) rings, frequently with mixed metals and designs, is the latest trend which shows any signs of fading. Of course, if you’d rather use only one ring to represent both your engagement and your (future) marital status, that’s acceptable as well. Some brides choose to wear only one ring for a variety of reasons:

Single bands are more convenient and less pretentious than a wedding band and engagement ring set, and they may look gorgeous on their own. It’s only one ring to lose (which is particularly necessary if you’re easily distracted).

You also didn’t have to think about two bands matching properly; finding a wedding band that matches your engagement ring might be difficult if they aren’t acquired as a set. The cash that would normally be used along with an engagement ring and a wedding band can instead be used to purchase a single, unique ring.

Note: Whenever it comes to selecting, creating, and wearing engagement and wedding rings, there are no right and wrong answers. You may wear none, one, two, three, perhaps more rings to represent your love and marriage—just make sure the band (or rings) you pick will have lasting importance for you for numerous future years.

It’s simple to see why people are confused by the distinctions between these two rings at first look. We’ve discovered why engagement and wedding rings are completely different from one another, having distinctive history, designs, and meanings, even though they are both based on love.